Craig Johnson is the author of eight novels in the Walt Longmire mystery series, which has garnered critical acclaim. The Walt Longmire series is the basis for the hit A&E drama, Longmire, starring Robert Taylor, Lou Diamond Phillips, and Katee Sackoff. Johnson currently lives in Ucross, Wyoming, with a population of twenty-five. 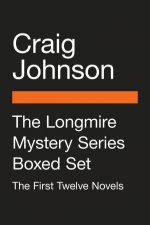 The Cold Dish (TV Tie In)
by Craig Johnson
24.99
24.99
_% Off
RRP refers to the Recommended Retail Price as set out by the original publisher at time of release.
The RRP set by overseas publishers may vary to those set by local publishers due to exchange rates and shipping costs.
Due to our competitive pricing, we may have not sold all products at their original RRP.