He has been placed in the same category as John le Carr and Graham Greene. He has been called his generation's finest writer of international intrigue and one of the greatest American spy novelists ever. Compelling, passionate, haunting, brilliant: these are the words that have been used to describe the work of Daniel Silva.

Silva burst onto the scene in 1997 with his electrifying bestselling debut, The Unlikely Spy, a novel of love and deception set around the Allied invasion of France in World War II. His second and third novels, The Mark of the Assassin and The Marching Season, were also instant New York Times bestsellers and starred two of Silva's most memorable characters: CIA officer Michael Osbourne and international hit man Jean-Paul Delaroche. But it was Silva's fourth novel, The Kill Artist, that would alter the course of his career. The novel featured a character described as one of the most memorable and compelling in contemporary fiction, the art restorer and sometime Israeli secret agent Gabriel Allon, and though Silva did not realize it at the time, Gabriel's adventures had only just begun. Gabriel Allon appeared in Silva's next four novels, each one more successful than the last: The English Assassin, The Confessor, A Death in Vienna, and Prince of Fire. The sixth Gabriel Allon novel, The Messenger, will be published in July 2006.

Silva knew from a very early age that he wanted to become a writer, but his first profession would be journalism. Born in Michigan, raised and educated in California, he was pursuing a master's degree in international relations when he received a temporary job offer from United Press International to help cover the 1984 Democratic National Convention in San Francisco. Later that year Silva abandoned his studies and joined UPI fulltime, working first in San Francisco, then on the foreign desk in Washington, and finally as Middle East correspondent in Cairo and the Persian Gulf. In 1987, while covering the Iran-Iraq war, he met NBC correspondent Jamie Gangel. They were married later that year. Silva returned to Washington and went to work for CNN. In 1994 Jamie gave birth to a set of twins, Lily and Nicholas. 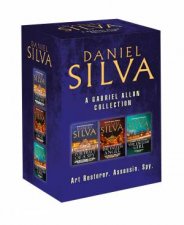 The Heist
by Daniel Silva
19.99
19.99
_% Off
RRP refers to the Recommended Retail Price as set out by the original publisher at time of release.
The RRP set by overseas publishers may vary to those set by local publishers due to exchange rates and shipping costs.
Due to our competitive pricing, we may have not sold all products at their original RRP.