Deborah Harkness grew up in the suburbs of Philadelphia, and has been a student and scholar of history, recieving degrees from Mount Holyoke College, Northwestern University, and the University of California. She currently teaches European history and the history of science at the University of Southern California in Los Angeles.

Her previous books include two works of non-fiction: 'John Dee's Conversations with Angels: Cabala, Alchemy, and the End of Nature', and 'The Jewel House: Elizabethan London and the Scientific Revolution'.

Deborah's career in fiction began in September 2008. 'A Discovery of Witches' was her first published fiction novel, which debuted at #2 on the New York Times bestseller list, and was also a bestseller in the UK, France, and Germany. The story of Diana and Matthew continues in the #1 New York Times Bestseller 'Shadow of Night'. Deborah is currently working on the third book in the All Souls Trilogy. 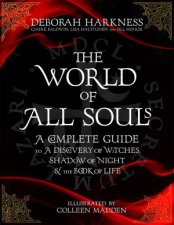 A Discovery Of Witches
by Deborah Harkness
22.99
22.99
_% Off
RRP refers to the Recommended Retail Price as set out by the original publisher at time of release.
The RRP set by overseas publishers may vary to those set by local publishers due to exchange rates and shipping costs.
Due to our competitive pricing, we may have not sold all products at their original RRP.