Derek Landy is the author of the popular children's series Skullduggery Pleasant.

He lives in Ireland with a variety of cats, a German Shepherd, and two Staffordshire Bull Terriers who keep piddling on his kitchen floor because they think it's funny. 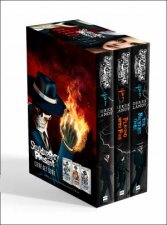 The Faceless Ones
by Derek Landy
16.99
16.99
_% Off
RRP refers to the Recommended Retail Price as set out by the original publisher at time of release.
The RRP set by overseas publishers may vary to those set by local publishers due to exchange rates and shipping costs.
Due to our competitive pricing, we may have not sold all products at their original RRP.