Diana Jean Gabaldon Watkins (b. January 11, 1952 in Arizona) is an American author of Mexican-American and English ancestry. Diana Gabaldon is her maiden name, and the one she uses professionally. Gabaldon is the author of the best-selling Outlander Series. Her books are difficult to classify by genre, since they contain elements of romantic fiction, historical fiction, and science fiction (in the form of time travel). Her books have so far been sold in 23 countries, and translated into 19 languages.

Gabaldon's first fiction efforts were posted on the CompuServe writers forum. She was an active member of an online community, and posted parts of her unfinished novel, Outlander, to strengthen her points in an argument with another poster. One of the people who read her post was a science fiction writer. He was impressed, and introduced her to his agent. This favorable feedback persuaded her to finish and publish the first book in the Outlander series, which later expanded to six books (two more are planned). The stories center around a time-travelling 20th-century nurse (Claire Beauchamp Randall Fraser) and her 18th-century Scottish husband (James Alexander Malcolm MacKenzie Fraser), and are located in Scotland, France, the West Indies and America. The seventh book of the series, An Echo in the Bone, is planned to be released in Fall 2009. The Lord John Series is a spin-off from the Outlander books, as it centers on a secondary character from the original series.

Note: Diana did not take her husband's name after they married, "My husband was mildly put out that I refused to take his name when we got married. I told him, though, that I'd been spelling "Gabaldon" for people for twenty-five years, and I was attached to it." 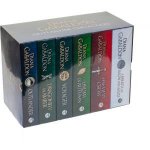 Outlander: Seven Stones To Stand Or Fall - A Collection Of Outlander Short Stories
by Diana Gabaldon
22.99
22.99
_% Off 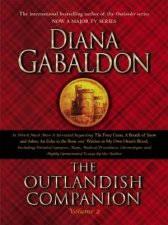 Lord John: Lord John and The Hand Of Devils
by Diana Gabaldon
22.99
22.99
_% Off
RRP refers to the Recommended Retail Price as set out by the original publisher at time of release.
The RRP set by overseas publishers may vary to those set by local publishers due to exchange rates and shipping costs.
Due to our competitive pricing, we may have not sold all products at their original RRP.