The Maze Runner is a 2009 young adult post-apocalyptic dystopian science fiction novel written by American author James Dashner and the first book, third chronologically, in The Maze Runner series. The novel was published on October 7, 2009 by Delacorte Press, an imprint of Random House, and was made into a 2014 major motion picture by 20th Century Fox. 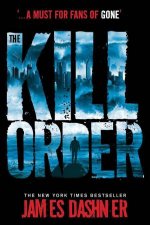 Kill Order
by James Dashner
18.99
18.99
_% Off
RRP refers to the Recommended Retail Price as set out by the original publisher at time of release.
The RRP set by overseas publishers may vary to those set by local publishers due to exchange rates and shipping costs.
Due to our competitive pricing, we may have not sold all products at their original RRP.