Elwyn Brooks White, known as E. B. White, is the author of such beloved classics as Charlotte's Web, Stuart Little, and The Trumpet of the Swan. He was born in Mount Vernon, New York and graduated from Cornell University in 1921 receiving the Bachelor of Arts.

He was a long-time contributor to The New Yorker magazine and a co-author of the widely-used English language style guide, The Elements of Style, which is commonly known as "Strunk & White". He also wrote famous books for children including Charlotte's Web and Stuart Little.

E. B. White won countless awards, including the 1971 National Medal for Literature and the Laura Ingalls Wilder Award, which commended him for making a "substantial and lasting contribution to literature for children." 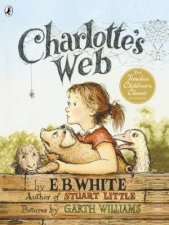 Charlotte's Web
by E.B. White
19.99
19.99
_% Off
RRP refers to the Recommended Retail Price as set out by the original publisher at time of release.
The RRP set by overseas publishers may vary to those set by local publishers due to exchange rates and shipping costs.
Due to our competitive pricing, we may have not sold all products at their original RRP.