Elizabeth Gilbert was born in Connecticut in 1969 and was raised on a small family Christmas tree farm. She is the sister of the young adult novelist Catherine Murdock author of Dairy Queen and The Off Season. Elizabeth went to college in New York City in the early 1990's, and spent the years after college traveling around the country and the world, working odd jobs, writing short stories and essentially creating what she has referred to as her own MFA program.

After more than five years of sending out work for publication and collecting only rejection letters, she finally broke onto the literary scene in 1993, when one of her short stories was pulled from the slush pile at Esquire magazine and published under the heading The Debut of an American Writer. 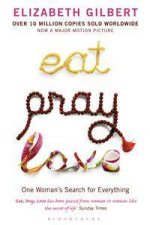 Eat, Pray, Love: One Woman's Search For Everything
by Elizabeth Gilbert
24.99
24.99
_% Off
RRP refers to the Recommended Retail Price as set out by the original publisher at time of release.
The RRP set by overseas publishers may vary to those set by local publishers due to exchange rates and shipping costs.
Due to our competitive pricing, we may have not sold all products at their original RRP.