Join us for a special signing event with

the Captain of the 2020 Telstra NRL Premiership Winners, The Melbourne Storm, Cameron Smith.
QBD Books are delighted to be hosting Cameron Smith at signings sessions for his new autobiography ‘The Storm Within’. The most decorated rugby league player of all time, Cameron's new book maps his unique journey in the game: an extraordinary look into the biggest matches and biggest moments, describing his career with great colour and candour, outlining what it takes to climb to the highest level in sport.

QBD Books will be hosting book signing sessions at the below locations in the coming months. We can’t wait to see you there!

QBD Australia Fair
From 10:30am until 12:00pm
QBD Townsville

QBD Rockhampton
Tell your friends, tell your family...bring everyone along for a great time and meet one of Australia's most beloved sporting heroes, just outside QBD Books.


Please note the following special conditions apply to all signing events during the COVID period:
* Social distancing applies to all queues and will be policed accordingly. Anyone not adhering to social distancing may be asked to leave.
* Anyone approaching the author must be wearing a mask and sanitise their hands.
* Any photos must be taken by the pwner of the phone and be socially distanced.
* Due to limited time, and to avoid disappointment, the queue may be capped, depending on length. The end time for each event is firm and cannot be extended.
* Cameron will only be signing copies of his new book. Any other merchandise will be confiscated by a team member and returned after your book/s have been signed.


About The Storm Within 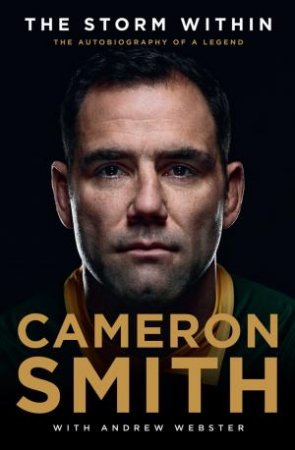 Cameron Smith AM is the most decorated rugby league player of all time. The recipient of numerous Dally M and Golden Boot awards, he has starred in the toughest league competition on the planet every season since he made his NRL debut in 2002. Captaining the Melbourne Storm to multiple premierships, Smith played in a staggering seventeen finals campaigns. An integral member of the record-breaking Queensland teams of 2006-2017, he won eleven State of Origin series. As skipper of the Australian national team for over a decade, he led the Kangaroos to two World Cups. Smith is credited with revolutionising the number nine position. He holds the State of Origin records for most appearances and most wins, as well as the NRL records for most games, goals, points scored, wins and appearances as captain.

This autobiography maps his unique journey in the game: an extraordinary look into the biggest matches and biggest moments, Smith describes his career with great colour and candour, outlining what it takes to climb to the highest level in sport. Talent aside, it is Smith's intelligence and poise that set him apart, coupled with consistency, durability and longevity that are unlikely to ever be matched. Notoriously private throughout his career, The Storm Within sets the record straight. Finally, the life behind the legend - the man behind the mystery - tells his story.
RRP refers to the Recommended Retail Price as set out by the original publisher at time of release.
The RRP set by overseas publishers may vary to those set by local publishers due to exchange rates and shipping costs.
Due to our competitive pricing, we may have not sold all products at their original RRP.