He produced the stunningly popular 1998 movie There's Something About Mary, starring Ben Stiller and Cameron Diaz. After this success he was able to create Automatic Pictures, which he still oversees. While visiting London for the 'Mary' premiere, he visited the British Museum, where he came upon an exhibit of ancient cards. He says they reminded him of Alice In Wonderland, but more esoteric. It is from here where he found his inspiration to write The Looking Glass Wars series. His stories found many fans across the globe, whom he engaged purposefully, delighted by their intrigue and intensity. This input lead the series of graphic novels featuring Hatter Madigan. The 'LGW' series has expanded to include and album, card game, an online video game, clothes and a proposed theatrical musical.

The Looking Glass Wars nearly didn't happen at all. After working for five years, every major US publisher had rejected him. It was published in the UK in 2004 and became a sensation. (US Publishers followed in 2006, presumably with tales between their legs..) 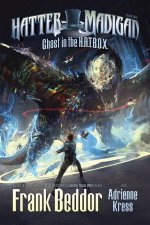 Hatter Madigan: Ghost In The Hatbox
by Frank Beddor & Adrienne Kress
32.99
32.99
_% Off
RRP refers to the Recommended Retail Price as set out by the original publisher at time of release.
The RRP set by overseas publishers may vary to those set by local publishers due to exchange rates and shipping costs.
Due to our competitive pricing, we may have not sold all products at their original RRP.