The spacemice have received an invitation to participate in the intergalactic soccerix championship. It's a tournament for the most popular sport in space! But Geronimo doesn't even know how to play soccerix, let alone lead a team to victory against aliens with bizarre skills (like flying)! Can the spacemice team prevail? 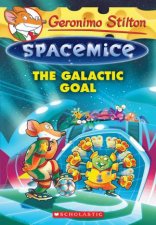 The Galactic Goal
Geronimo Stilton
RRP $12.99
$12.99
RRP refers to the Recommended Retail Price as set out by the original publisher at time of release.
The RRP set by overseas publishers may vary to those set by local publishers due to exchange rates and shipping costs.
Due to our competitive pricing, we may have not sold all products at their original RRP.