Born in 1944, Glen Cook grew up in northern California, served in the U.S. Navy, attended the University of Missouri, and was one of the earliest graduates of the well-known "Clarion" workshop SF writers. Since 1971 he has published a large number of SF and fantasy novels, including the "Dread Empire" series, the occult-detective "Garrett" novels, and the very popular "Black Company" sequence that began with the publication of The Black Company in 1984. Among his SF novels is A Passage at Arms.

After working many years for General Motors, Cook now writes full-time. He lives near St. Louis, Missouri, with his wife Carol. 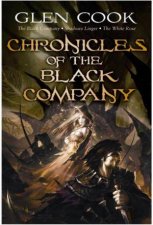 Chronicles of the Black Company: The Black Company, Shadows Linge
by Glen Cook
45.00
45.00
_% Off
RRP refers to the Recommended Retail Price as set out by the original publisher at time of release.
The RRP set by overseas publishers may vary to those set by local publishers due to exchange rates and shipping costs.
Due to our competitive pricing, we may have not sold all products at their original RRP.