Harry Sidebottom was brought up in racing stables in Newmarket where his father was a trainer. He had a basket saddle on a donkey before he could walk.

Away from classical scholarship his other interests include fiction, travel, sport, booze, and women. 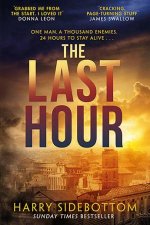 The Last Hour
by Harry Sidebottom
29.99
29.99
_% Off
RRP refers to the Recommended Retail Price as set out by the original publisher at time of release.
The RRP set by overseas publishers may vary to those set by local publishers due to exchange rates and shipping costs.
Due to our competitive pricing, we may have not sold all products at their original RRP.