Michael completed the Path. What he found at the end turned everything he'd ever known about his life completely upside down.

He thought he'd been helping VirtNet Security to track down the cyber-terrorist Kaine.

He thought the VirtNet would be safe for gamers once more.

But the truth is more terrifying than he could ever have imagined. Kaine is in fact a Tangent, a computer program that has come alive. And Kaine's master plan is to populate the earth entirely with human bodies harbouring Tangent minds.

From the New York Times bestselling author of the Maze Runner series comes The Rule of Thoughts, the exciting sequel to The Eye of Minds. Fans of the Divergent series by Veronica Roth and The Hunger Games will love the new Mortality Doctrine series. 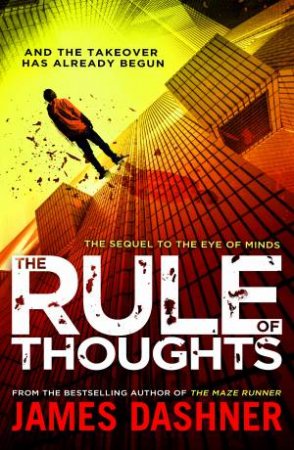 The Rule Of Thoughts
James Dashner
$19.99
RRP refers to the Recommended Retail Price as set out by the original publisher at time of release.
The RRP set by overseas publishers may vary to those set by local publishers due to exchange rates and shipping costs.
Due to our competitive pricing, we may have not sold all products at their original RRP.