Jim Butcher (born in Independence, Missouri, United States, on October 26, 1971) is a New York Times Best Selling author most known for his contemporary fantasy book series The Dresden Files. He also wrote the Codex Alera series. Butcher grew up as the only son of his parents, and has two older sisters. He currently lives in Independence with his wife, Shannon K. Butcher (an author of romance novels), one son, and his guard dog, F. D. M. Butcher

Since becoming published, Butcher has written two series: The Dresden Files and Codex Alera. Codex Alera has ended after six novels and The Dresden Files are still ongoing; he has also written a Spider-Man novel, entitled The Darkest Hours, released on June 27, 2006. In addition, he contributed a short story for publication in My Big Fat Supernatural Wedding with Charlaine Harris and Sherrilyn Kenyon, among others, released in October 2006. He has since contributed to the anthologies Many Bloody Returns in September 2007 and My Big Fat Supernatural Honeymoon in December 2007. In October 2008, he released another short story in Blood Lite and a novelette, Backup, illustrated by Mike Mignola. 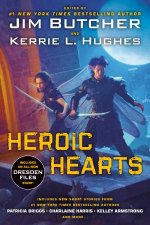 Dead Beat
by Jim Butcher
22.99
22.99
_% Off
RRP refers to the Recommended Retail Price as set out by the original publisher at time of release.
The RRP set by overseas publishers may vary to those set by local publishers due to exchange rates and shipping costs.
Due to our competitive pricing, we may have not sold all products at their original RRP.