John Grogan (born March 20, 1957) is an American journalist and non-fiction writer. His memoir Marley & Me (2005) was a best-selling book about his family's dog Marley. He had been a reporter, bureau chief, and columnist for newspapers in Michigan and Florida before becoming the editor in chief of Rodale's Organic Gardening magazine. He was a columnist for The Philadelphia Inquirer. The Inquirer published a volume of his best articles in 2007 called, Bad Dogs Have More Fun. His next memoir, The Longest Trip Home, was released on October 21, 2008.

He lives with his wife, Jenny, and their three children, Patrick, Conor, and Colleen in rural eastern Pennsylvania. Grogan's dog Marley appeared in the movie The Last Home Run when he was on film for less than 2 minutes when a van pulls up to a curb and a girl steps out and a boy steps out with Marley.

Marley & Me has been adapted into a film that was released December 25, 2008 starring Owen Wilson and Jennifer Aniston. Grogan is a graduate of Central Michigan University's Department of Journalism and wrote for the school newspaper, CM-Life. 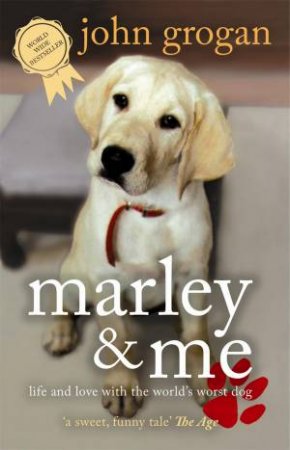 Marley And Me: Life And Love With The World's Worst Dog
John Grogan
$19.99

Marley Y Yo
John Grogan
$25.99
RRP refers to the Recommended Retail Price as set out by the original publisher at time of release.
The RRP set by overseas publishers may vary to those set by local publishers due to exchange rates and shipping costs.
Due to our competitive pricing, we may have not sold all products at their original RRP.