Jonathan Kellerman was born in New York City in 1949 and grew up in Los Angeles. He helped work his way through UCLA as an editorial cartoonist, columnist, editor and freelance musician. As a senior, at the age of 22, he won a Samuel Goldwyn Writing Award for fiction.

Like his fictional protagonist, Alex Delaware, Jonathan received at Ph.D. in psychology at the age of 24, with a specialty in the treatment of children. He served internships in clinical psychology and pediatric psychology at Childrens Hospital of Los Angeles and was a post-doctoral HEW Fellow in Psychology and Human Development at CHLA.

IN 1975, Jonathan was asked by the hospital to conduct research into the psychological effects of extreme isolation (plastic bubble units) on children with cancer, and to coordinate care for these kids and their families. The success of that venture led to the establishment, in 1977 of the Psychosocial Program, Division of Oncology, the first comprehensive approach to the emotional aspects of pediatric cancer anywhere in the world. Jonathan was asked to be founding director and, along with his team, published extensively in the area of behavioral medicine. Decades later, the program, under the tutelage of one of Jonathan's former students, continues to break ground. 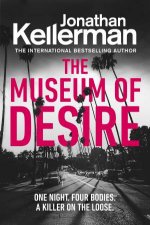 Motive
by Jonathan Kellerman
24.99
24.99
_% Off
RRP refers to the Recommended Retail Price as set out by the original publisher at time of release.
The RRP set by overseas publishers may vary to those set by local publishers due to exchange rates and shipping costs.
Due to our competitive pricing, we may have not sold all products at their original RRP.