The daughter of a prosperous financier and consultant, McWilliams graduated from Smith College (B.A., 1934) and worked occasionally in advertising. During World War II, from 1941 to 1945, she performed clerical work in Ceylon (Sri Lanka) and China for the Office of Strategic Services (OSS, the forerunner of the Central Intelligence Agency), where she met Paul Cushing Child, whom she married in 1945. During the Childs' six-year postwar stay in Paris, she attended the Cordon Bleu cooking school for six months and studied privately with master chef Max Bugnard. She and two French friends, Simone Beck and Louisette Bertholle, in 1951 founded L' cole des Trois Gourmandes ( The School of the Three Gourmands ) and later wrote the best-selling cookbook Mastering the Art of French Cooking, 2 vol. (1961, 1970), which was praised for its clarity and comprehensiveness.
The Childs settled in Cambridge, Massachusetts, in 1961, though they continued to visit Europe regularly and maintained a house in the south of France. From Boston's public television station she then initiated the immensely popular cookery series The French Chef, which premiered in 1963. It is credited with convincing the American public to try cooking French food at home. With her humour, exuberance, and unpretentiousness, Child became an unlikely star. Although she often made mistakes while cooking, she remained unflappable, encouraging viewers to accept mishaps and continue cooking. Child, who had a distinct warbling voice, ended each show with Bon app tit! 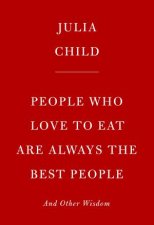 People Who Love To Eat Are Always The Best People
by Julia Child
38.99
38.99
_% Off
RRP refers to the Recommended Retail Price as set out by the original publisher at time of release.
The RRP set by overseas publishers may vary to those set by local publishers due to exchange rates and shipping costs.
Due to our competitive pricing, we may have not sold all products at their original RRP.