Justin D'Ath is the author of over 30 books for children and young adults, including the hugely popular Extreme Adventures series. Other books include Astrid Spark, Fixologist, The Skyflower, Robbie and the Dolphins, Infamous, and Why did the Chykkan cross the Galaxy?

Justin's first publication was a monthly cartoon strip in a magazine, which he used to draw in his tent while he travelled around Australia on a motorbike. His first book, a novel for adults called The Initiate, was published in 1989 and won three awards. His adult short stories have been published in 18 countries and have won 54 literary prizes.

For twenty years Justin wrote only for adults - in addition to his other jobs: driving forklifts, building cars, picking fruit, mustering cattle, mining for iron, working in a laboratory, being a club manager in an Aborigine settlement, working in a sugar mill and teaching Professional Writing at TAFE. 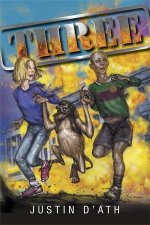 Pool
by Justin D'Ath
19.95
19.95
_% Off
RRP refers to the Recommended Retail Price as set out by the original publisher at time of release.
The RRP set by overseas publishers may vary to those set by local publishers due to exchange rates and shipping costs.
Due to our competitive pricing, we may have not sold all products at their original RRP.