Lynda La Plante, CBE (born Lynda Titchmarsh on 15 March 1946) is an English author, screenwriter and former actress, best known for writing the Prime Suspect television crime series. She formed her own television production company, La Plante Productions, in 1994 and as La Plante Productions she wrote and produced the sequel to Widows, She's Out (1995). The name "La Plante" comes from her marriage to writer Richard La Plante, author of the book Mantis and Hog Fever. La Plante divorced Lynda in the early 1990s. 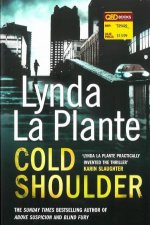 Blunt Force
by Lynda La Plante
19.99
19.99
_% Off
RRP refers to the Recommended Retail Price as set out by the original publisher at time of release.
The RRP set by overseas publishers may vary to those set by local publishers due to exchange rates and shipping costs.
Due to our competitive pricing, we may have not sold all products at their original RRP.