M. K. Hume was born in Ipswitch, Queensland in 1948. She is the author of 'The Merlin Prophecy' series and the 'King Arthur' series.

Hume went to Ipswich State High School and, after graduating, became a High School teacher teaching Art, History and English Literature. From early childhood, Hume was introduced to the prose stories of Tennyson and later fell in love with his poetic skills. Hume completed a PhD, undertaking a major study on Charles Williams, an English poet and novelist who wrote esoteric Arthurian literature during the period from 1920 to 1940. Although unknown to most of the wider literary establishment, Williams was a genius in his own right who wrote some of the most esoteric works produced in the 20th Century. His best-known works were his poetic triumphs, Taliessin Through Logres and The Region of the Summer Stars.

Hume currently resides in Brisbane, Queensland, but escapes to Europe and Britain for research as well as fun at every possible opportunity. She has two sons, Damien and Brendan. 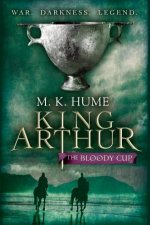 Dragon's Child
by M. K. Hume
26.99
26.99
_% Off
RRP refers to the Recommended Retail Price as set out by the original publisher at time of release.
The RRP set by overseas publishers may vary to those set by local publishers due to exchange rates and shipping costs.
Due to our competitive pricing, we may have not sold all products at their original RRP.