Maeve Binchy (born 28 May 1940, Dalkey) is an Irish novelist, newspaper columnist and speaker. Educated at University College Dublin, she worked as a teacher, then a journalist at The Irish Times and later become a writer of novels and short stories.

Many of her novels are set in Ireland, dealing with the tensions between urban and rural life, the contrasts between England and Ireland, and the dramatic changes in Ireland between World War II and the present day. Her novel Circle of Friends was made into a 1995 Hollywood movie starring Chris O'Donnell and Minnie Driver with a radical change of ending.

Binchy announced in 2000 that she would not be going on tours with any more novels, but would be devoting her time to other activities, and to her English-born husband, Gordon Snell, a children's author. However, she has written three further novels since then - Quentins, Night of Rain and Stars and Whitethorn Woods. 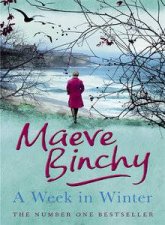 Whitethorn Woods
by Maeve Binchy
26.99
26.99
_% Off
RRP refers to the Recommended Retail Price as set out by the original publisher at time of release.
The RRP set by overseas publishers may vary to those set by local publishers due to exchange rates and shipping costs.
Due to our competitive pricing, we may have not sold all products at their original RRP.