Born in Sydney in 1915, Manning Clark won scholarships to Melbourne Grammar School and the University of Melbourne. He later attended Balliol College, Oxford, and in the early 1940s taught history at schools in England and Australia. He was a senior lecturer at the University of Melbourne and, later, Professor of History in the School of General Studies, Australian National University. In 1972 he became the first Professor of Australian History and was awarded honorary doctorates by the Universities of Melbourne, Newcastle and Sydney. His classic text, the six-volume History of Australia (1962-1987) popularised the study of Australian history. In June 1975, Clark was made a Companion of the Order of Australia, in recognition of his writing of the History, and was named Australian of the Year in 1980. He is the author of the two volume autobiography: The Puzzles of Childhood (1988) and The Quest for Grace (1989). Professor Clark died in May 1991. 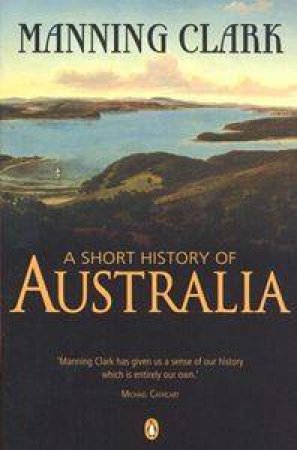 A Short History Of Australia
Manning Clark
$26.99
RRP refers to the Recommended Retail Price as set out by the original publisher at time of release.
The RRP set by overseas publishers may vary to those set by local publishers due to exchange rates and shipping costs.
Due to our competitive pricing, we may have not sold all products at their original RRP.