Margaret Edith Weis (born March 16, 1948 in Independence, Missouri, United States) is a fantasy novelist who, along with Tracy Hickman, is one of the original creators of the Dragonlance game world and has written numerous novels and short stories set in the world of Krynn. She graduated from the University of Missouri and now lives in southern Wisconsin in a converted barn. Most recently, she has completed the third novel in the Dragonvarld trilogy for TOR, Master of Dragons. Her second novel in the Dark Disciple series, Amber and Iron, was released to stores on February 1, 2006. She has finished work on the first novel in the Lost Chronicles series with co-author Hickman, entitled Dragons of the Dwarven Depths, which was released in July 2006.

In 1999 Pyramid magazine named Margaret Weis as one of The Millennium's Most Influential Persons "at least in the realm of adventure gaming." The magazine stated that Tracy Hickman and Margaret Weis are "basically responsible for the entire gaming fiction genre." Weis was inducted into the Origins Hall of Fame in 2002, recognized in part for "one game line turned literary sensation: Dragonlance."

In addition to her writing career, Margaret serves as the owner and chief officer of two publishing companies, including Sovereign Press, Inc., a game publisher based in Lake Geneva, Wisconsin. The company used to own the license to Larry Elmore's Sovereign Stone RPG world, hence the name of the company. It now produces the Dragonlance line of game products, licensed from Wizards of the Coast. Her newest company, Margaret Weis Productions, Ltd, publishes RPG line based on several licenses including Serenity and Battlestar Galactica as well as Ed Greenwood's new solo venture into roleplaying, Castlemourn. 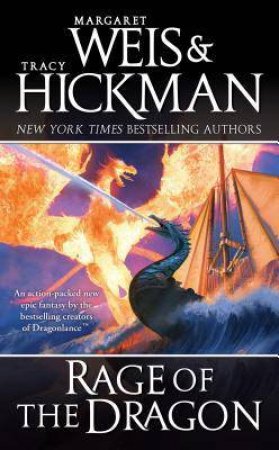 Rage of the Dragon
Margaret Weis
Tracey Hickman
$14.99
RRP refers to the Recommended Retail Price as set out by the original publisher at time of release.
The RRP set by overseas publishers may vary to those set by local publishers due to exchange rates and shipping costs.
Due to our competitive pricing, we may have not sold all products at their original RRP.