Marian Keyes is one of the msot successful irish novelists of all time. Though she was bought up in a home where a lot of oral story-telling went on, it never occurred to her that she could write. Instead she studies law and accountancy and finally started writing short stories in 1993 "out of the blue". Though she never had any intention of writing a novel ("it would take too long")she sent her short stories to a publisher, with a letter saying she'd started work on a novel. The publishers replied, asking to see the novel, and once her panic subsided, she began to write what subsequently became her first novel, Watermelon.

She was born in Limerick in 1963, and brought up in Cavan, Cork, Galway and Dublin; she spent her twenties in London, but is now living in D n Laoghaire with her husband Tony. She includes among her hobbies, reading, movies, shoes, handbags and feminism. 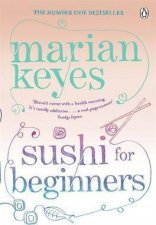 The Brightest Star In The Sky
by Marian Keyes
22.99
22.99
_% Off
RRP refers to the Recommended Retail Price as set out by the original publisher at time of release.
The RRP set by overseas publishers may vary to those set by local publishers due to exchange rates and shipping costs.
Due to our competitive pricing, we may have not sold all products at their original RRP.