His best-known novel, The Godfather, was preceded by two critically acclaimed novels, The Dark Arena and The Fortunate Pilgrim. In 1978, he published Fools Die, followed by The Sicilian (1984) and The Fourth K (1991).

Mario Puzo has also written several screenplays, including all three Godfather movies, for which he received two Academy Awards. Mario's latest novel, 1996's The Last Don, was made into a CBS television miniseries in May 1997, starring Danny Aiello, Kirsty Ally and Joe Montegna. In 1997, Part II was aired. Also in 1997, Mario's The Fortunate Pilgrim was re-released by Random House. 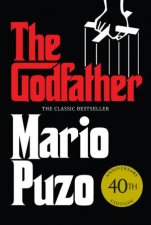 Godfather
by Mario Puzo
19.99
19.99
_% Off
RRP refers to the Recommended Retail Price as set out by the original publisher at time of release.
The RRP set by overseas publishers may vary to those set by local publishers due to exchange rates and shipping costs.
Due to our competitive pricing, we may have not sold all products at their original RRP.