Martin Cruz Smith was born in Reading, Pennsylvania, in 1942. He originally wrote under the name Martin Smith only to discover there were other writers with the same name. His agent Knox Burger asked Smith to add a third name and Smith chose Cruz, his paternal grandmother's surname.

Martin Smith is a well educated man who studied at the University of Pennsylvania, and received a Bachelor of Arts in Creative Writing in 1964. Smith went on to become a well known author. He is best known for his novels featuring the Russian Ivestigator Arkady Renko. He has been very successful in hes writing career and his books have been called the "thriller of the '80s" by Time Magazine. 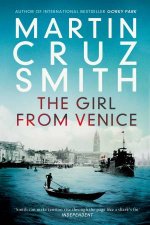 Gorky Park
by Martin Cruz Smith
19.99
19.99
_% Off
RRP refers to the Recommended Retail Price as set out by the original publisher at time of release.
The RRP set by overseas publishers may vary to those set by local publishers due to exchange rates and shipping costs.
Due to our competitive pricing, we may have not sold all products at their original RRP.