MaryJanice Davidson invented a) her children, and b) the vampire chick lit genre. Also the Internet. She is kind to (some) children and (occasional) small animals, and enjoyes referring to herself in the third person. Appearing several times a year on the best-seller list, as well as occasional Federal "person of interest" sheets, she takes time from the living hell that is being paid to do what she loves best to seek out the nearest Cinnabon franchise. Her goals include working for world peace, figuring out how to make potstickers, and speaking at writer and reader conferences around the world. (Australia is still recovering.) 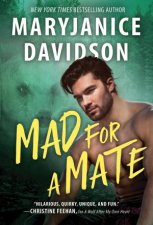 The Green Grocer
by Maryjanice Davidson
29.99
29.99
_% Off
RRP refers to the Recommended Retail Price as set out by the original publisher at time of release.
The RRP set by overseas publishers may vary to those set by local publishers due to exchange rates and shipping costs.
Due to our competitive pricing, we may have not sold all products at their original RRP.