Born in Australia in November 1960, Michael Robotham grew up in small country towns that had more dogs than people and more flies than dogs. He escaped in 1979 and became a cadet journalist on an afternoon newspaper in Sydney.

For the next fourteen years he wrote for newspapers and magazines in Australia, Britain and America. As a senior feature writer for the UK's Mail on Sunday he was among the first people to view the letters and diaries of Czar Nicholas II and his wife Empress Alexandra, unearthed in the Moscow State Archives in 1991. He also gained access to Stalin's Hitler files, which had been missing for nearly fifty years until a cleaner stumbled upon a cardboard box that had been misplaced and misfiled.

In 1993 he quit journalism to become a ghostwriter, collaborating with politicians, pop stars, psychologists, adventurers and show business personalities to write their autobiographies. Twelve of these non-fiction titles were bestsellers with combined sales of more than 2 million copies. 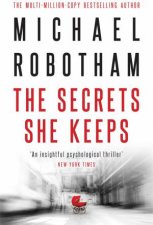 The Secrets She Keeps
by Michael Robotham
19.99
19.99
_% Off
RRP refers to the Recommended Retail Price as set out by the original publisher at time of release.
The RRP set by overseas publishers may vary to those set by local publishers due to exchange rates and shipping costs.
Due to our competitive pricing, we may have not sold all products at their original RRP.