Michelle Paver was born in Malawi (central Africa); her mother was Belgian and her South African father ran a modest newspaper, the Nyasaland Times. She moved to the United Kingdom when she was three, where she grew up in Wimbledon and was educated at Lady Margaret Hall. After reading biochemistry at the University of Oxford, where she attained a first-class degree, she became a partner in a City law firm. Her father's death in 1996 prompted her to take a one-year sabbatical, during which she travelled around France and America, and wrote her first book, 'Without Charity'. She resigned from legal practice soon after her return, to concentrate on writing.

Paver is most known for her children's series Chronicles of Ancient Darkness. Wolf Brother the first book in the series was published in 2004 and as a whole the books have sold over 1 million copies throughout the UK. Paver was paid a reported 2.8 million advance for the first book. 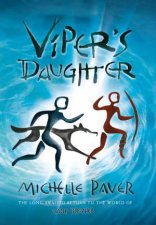 Soul Eater
by Michelle Paver
17.99
17.99
_% Off
RRP refers to the Recommended Retail Price as set out by the original publisher at time of release.
The RRP set by overseas publishers may vary to those set by local publishers due to exchange rates and shipping costs.
Due to our competitive pricing, we may have not sold all products at their original RRP.