Noam Chomsky was born in Philadelphia and educated at the University of Pennsylvania, where he received his B.A. (1949), M.A. (1951), and Ph.D. (1955). In 1955, he was appointed to the faculty of the Massachusetts Institute of Technology (MIT), where he has served as professor of foreign languages and linguistics. He has also taught courses and lectured at many universities throughout the world, including Oxford University. Besides his work in the field of psycholinguistics, Chomsky is also well-known as a leftist activist and social critic. He was an outspoken opponent of the Vietnam War and has remained critical of media coverage of politics. Although Chomsky's work is primarily of interest to linguistics scholars, several of his theories have had popular applications in psychology.

Chomsky's work has been highly controversial, rekindling the age-old debate over whether language exists in the mind before experience. His theories also distinguish between language competence (knowledge of rules and structure) and performance (how an individual uses language in practice). Besides Syntactic Structures , Chomsky's books include Current Issues in Linguistics Theory (1964), Aspects of the Theory of Syntax (1965), Topics in the Theory of Generative Grammar (1966), Cartesian Linguistics (1966), Language and Mind (1968), Reflections on Language (1975), Logical Structure of Linguistic Theory (1975), and Knowledge of Language (1986).

Global Discontents: Conversations On The Rising Threats To Democracy
by Noam Chomsky
22.99
22.99
_% Off 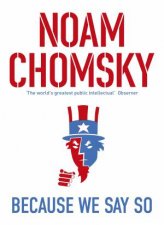 Manufacturing Consent
by Noam Chomsky & Edward S Herman
24.99
24.99
_% Off
RRP refers to the Recommended Retail Price as set out by the original publisher at time of release.
The RRP set by overseas publishers may vary to those set by local publishers due to exchange rates and shipping costs.
Due to our competitive pricing, we may have not sold all products at their original RRP.