Former Dublin librarian Patricia Scanlan came to writing through a cash crisis. Although Patricia's first two novels have never been published, she became thoroughly addicted to writing whilst working on them, and now sees those books as very important stepping stones in her writing career.

In Ireland alone Patricia has to date sold over one million copies of her books, which include such bestsellers as City Girl, City Lives, City Woman, Apartment 3B, Finishing Touches, Foreign Affairs, Mirror Mirror, Promises Promises and Francesca's Party. All have gone straight to the number-one spot on the Irish bestseller lists.

Patricia is very proud of her involvement as series editor of "The Open Door Series" in Ireland. The brainchild of Patricia herself, this literacy project has become a huge critical and commercial success. The Series aims to help adults and teenagers improve their literacy skills and to assist people learning English. Should she ever stop writing, a career in publishing is definitely in the cards. 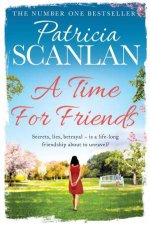 A Time for Friends
by Patricia Scanlan
22.99
22.99
_% Off
RRP refers to the Recommended Retail Price as set out by the original publisher at time of release.
The RRP set by overseas publishers may vary to those set by local publishers due to exchange rates and shipping costs.
Due to our competitive pricing, we may have not sold all products at their original RRP.