Paul Clitheroe graduated from the University of NSW in the late 1970s and has been involved in the investment industry ever since. He is a founding director of one of Australia and New Zealand's best known research and investment houses, IPAC Securities Ltd, specialising in the field of portfolio management and financial advice. He has completed the 2 year postgraduate course offered by the Securities Institute and is an associate director of that professional body. He was a board member of the Financial Planning Association of Australia between 1992 and 1994; in 1993 he was elected the Vice President and in 1994, the President. Since June 1993 he has hosted the successful and enormously popular Nine Network television program Money. He has been a media commentator and conference speaker for over ten years and is regarded as a leading expert in the field of personal investment strategies and advice. Paul lives in Sydney with his wife, Vicki, and three young children. 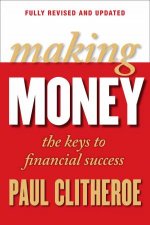 Making Money
by Paul Clitheroe
35.00
35.00
_% Off
RRP refers to the Recommended Retail Price as set out by the original publisher at time of release.
The RRP set by overseas publishers may vary to those set by local publishers due to exchange rates and shipping costs.
Due to our competitive pricing, we may have not sold all products at their original RRP.