Paul Ham is a Sydney-based historian, and the author of HIROSHIMA NAGASAKI, published in November 2011. His previous books are VIETNAM: THE AUSTRALIAN WAR (November 2007) and KOKODA (November 2004). VIETNAM won the NSW Premier's Prize for Australian History and was shortlisted for the Prime Minister's Prize for Non-Fiction (2008), a Walkley Award and two other State literary awards. KOKODA was shortlisted for the Walkley Award for Non-Fiction and the NSW Premier's Prize for Non-Fiction. Since 1998, Paul has been the Australia correspondent for The London Sunday Times, covering politics, business and current affairs. He has a Masters degree in Economic History from the London School of Economics, and lives in Sydney with his wife, Marie, and son, Oliver. 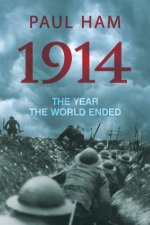 Vietnam: The Australian War
by Paul Ham
39.99
39.99
_% Off
RRP refers to the Recommended Retail Price as set out by the original publisher at time of release.
The RRP set by overseas publishers may vary to those set by local publishers due to exchange rates and shipping costs.
Due to our competitive pricing, we may have not sold all products at their original RRP.