Peter Robinson was born in Yorkshire. After getting his BA Honours Degree in English Literature at the University of Leeds, he went to Canada and took his MA in English and Creative Writing at the University of Windsor, with Joyce Carol Oates as his tutor, then a PhD in English at York University. He has taught at a number of Toronto colleges and served as Writer-in-Residence at the University of Windsor, 1992-93. His first novel, Gallows View (1987), introduced Detective Chief Inspector Alan Banks. It was short-listed for the John Creasey Award in the UK and Crime Writers of Canada best first novel award. A Dedicated Man followed in 1988 and was short-listed for the CWC's Arthur Ellis Award. A Necessary End and The Hanging Valley, both Inspector Banks novels, followed in 1989, and the latter was nominated for an Arthur Ellis Award. Both received starred reviews in Publishers Weekly in the US.

The eighth Inspector Banks novel, Innocent Graves (1996) was picked as one of Publishers Weekly's best mysteries of 1996 and selected as "page-turner of the week" by People magazine. Innocent Graves was also nominated for a Hammett Award for "literary excellence in the field of crime writing" by the International Association of Crime Writers, and won the author his second Arthur Ellis Award for best novel. In a Dry Season, the tenth in the series, won the Anthony and Barry awards for best novel and was nominated for the Edgar, Hammett, Macavity and Arthur Ellis Awards. In 2001, it also won France's Grand Prix de Litt rature Polici re and Sweden's Martin Beck Award. It was also a New York Times Notable Book of 1999. The next book, Cold is the Grave, won the Arthur Ellis Award and was nominated for the Los Angeles Times Book Award. Aftermath appeared in 2002 and made the top ten in both the UK and Canadian bestseller lists, where it reached number one. 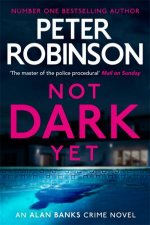 Children Of The Revolution
by Peter Robinson
22.99
22.99
_% Off
RRP refers to the Recommended Retail Price as set out by the original publisher at time of release.
The RRP set by overseas publishers may vary to those set by local publishers due to exchange rates and shipping costs.
Due to our competitive pricing, we may have not sold all products at their original RRP.