Ransom Riggs is a writer and filmmaker. He was born in rural Maryland and grew up in Florida. With little else to do at the time, he began making up his own stories for fun, which has grown into a successful writing career. For three summers during high school he attended the University of Virginia's Young Writer's Workshop. He then went to Kenyon College first to study English, then moved out to Los Angeles to go to film school at the University of Southern California.

His first novel was a non-fiction book about Sherlock Holmes, called 'The Sherlock Holmes Handbook', published in 2009. His additional novels include 'Miss Peregrine's Home for Peculiar Children', 'Talking Pictures' and 'Strange Geographies'. 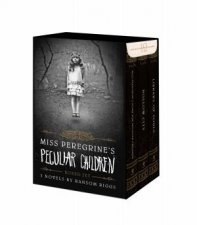 Miss Peregrine's Home for Peculiar Children
by Ransom Riggs
22.99
22.99
_% Off
RRP refers to the Recommended Retail Price as set out by the original publisher at time of release.
The RRP set by overseas publishers may vary to those set by local publishers due to exchange rates and shipping costs.
Due to our competitive pricing, we may have not sold all products at their original RRP.