Saul David was born in Monmouth in 1966 and educated at Ampleforth College and Edinburgh and Glasgow Universities (History MA and PhD).

An expert in the wars of the Victorian period, he began writing his first history book when he was twenty-five and has since completed eight more.

An experienced broadcaster, Saul appears often on British radio and television. He was an on-screen expert on BBC2's virtual battle series Time Commanders (2004) and is a regular contributor to history programmes on all channels. Two of his books Mutiny at Salerno and Zulu have been made into documentaries. 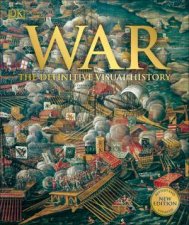 100 Days to Victory: How the Great War Was Fought and Won
by Saul David
26.99
26.99
_% Off
RRP refers to the Recommended Retail Price as set out by the original publisher at time of release.
The RRP set by overseas publishers may vary to those set by local publishers due to exchange rates and shipping costs.
Due to our competitive pricing, we may have not sold all products at their original RRP.