Scott Mariani is the author of the worldwide-acclaimed action-adventure thriller series featuring ex-SAS hero Ben Hope. Scott's novels have topped the bestseller charts in his native Britain and are translated into over twenty languages worldwide. To date the Ben Hope series comprises The Alchemist's Secret, The Mozart Conspiracy, The Doomsday Prophecy (published in the USA as The Hope Vendetta), The Heretic's Treasure, The Shadow Project, The Lost Relic, The Sacred Sword and the forthcoming The Armada Legacy (May 2013).

Scott's novels have been described as James Bond meets Jason Bourne with a historical twist'. His passion for history is reflected in the historical mysteries that form the backdrop to the modern-day adventures of hard-driving former soldier Ben Hope as he travels all over the world in an unending quest to protect and rescue the innocent and bring bad guys to justice as only he can. 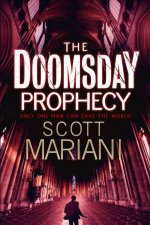 Valley Of Death
by Scott Mariani
19.99
19.99
_% Off
RRP refers to the Recommended Retail Price as set out by the original publisher at time of release.
The RRP set by overseas publishers may vary to those set by local publishers due to exchange rates and shipping costs.
Due to our competitive pricing, we may have not sold all products at their original RRP.