Terence Alan Patrick Se n Milligan was born in India to an English mother and an Irish father who was serving in the British Army. During his teens and early twenties Spike performed as a Jazz musician and was already starting to write comedy sketches.

During Word War II Spike served in the Royal Artilery which led to him being wounded in action whilst serving in Italy. During this time he continued his love of jazz and comedy by entertaining the troops with concert parties.

On his return to England during the late 1940's he continued appearances in several musical comedy acts, Spike then had a big break into the world of radio both writing scripts for and performing in the now famous 'Goon Show' with other comedy greats such as Peter Sellers and Harry Seacombe. The Goon Show ran from 1951 with the last one in 1972. 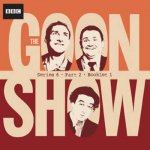 The Goon Show Compendium Volume 4 7/420
by Spike Milligan & Eric Sykes
120.00
120.00
_% Off
RRP refers to the Recommended Retail Price as set out by the original publisher at time of release.
The RRP set by overseas publishers may vary to those set by local publishers due to exchange rates and shipping costs.
Due to our competitive pricing, we may have not sold all products at their original RRP.