Karl Stig-Erland Larsson (15 August 15, 1954 9 November 9, 2004) was a Swedish journalist and writer, born in Skelleftehamn outside Skellefte . He is best known for his authorship of the Millennium Trilogy of crime novels which are being published posthumously. During 2008, he was the second-best selling author in the world, behind Afghani-American author Khaled Hosseini.

Larsson's political convictions, as well as his journalistic experiences, led him to found the Swedish Expo Foundation, similar to the British Searchlight Foundation, established to "counteract the growth of the extreme right and the white power-culture in schools and among young people." He also became the editor of the foundation's magazine, Expo. Larsson quickly became instrumental in documenting and exposing Swedish extreme right and racist organizations; he was an influential debater, lecturer and "expert" on the subject, reportedly living for years under death threats from his political enemies.

At his death, in November 2004 from a massive heart attack, Larsson left the manuscripts of three completed but unpublished novels in a series. He wrote them for his own pleasure after returning home from his job in the evening, making no attempt to get them published until shortly before his death. The first of these novels was published in Sweden in 2005 as M n som hatar kvinnor ("Men who hate women"), published in English as The Girl with the Dragon Tattoo. It was awarded the prestigious Glass Key award as the best Nordic crime novel in 2005. His second novel, Flickan som lekte med elden (The Girl Who Played with Fire), received the Best Swedish Crime Novel Award in 2006. He also left the unfinished manuscript of the fourth novel, and synopses of the fifth and sixth in the series, which was intended to contain an eventual total of ten books. 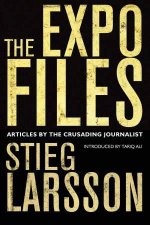 Girl Who Played With Fire AUS Film Tie-In
by Stieg Larsson
19.99
19.99
_% Off
RRP refers to the Recommended Retail Price as set out by the original publisher at time of release.
The RRP set by overseas publishers may vary to those set by local publishers due to exchange rates and shipping costs.
Due to our competitive pricing, we may have not sold all products at their original RRP.