Terry was born in Sunderland, England, in 1946 and now lives in County Durham, in the North-east of England.

Terry began his career as a professional actor in 1972 when he joined Theatre Powys in Mid-Wales. He has also worked as a theatre-director, museum manager, drama teacher, television presenter.

In 35 years as an author his writing has included fiction and popular non-fiction. He also writes TV, theatre, radio, audio and new media scripts. 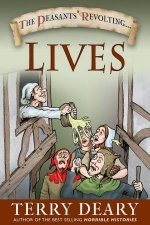 Put Out the Light
by Terry Deary
13.99
13.99
_% Off
RRP refers to the Recommended Retail Price as set out by the original publisher at time of release.
The RRP set by overseas publishers may vary to those set by local publishers due to exchange rates and shipping costs.
Due to our competitive pricing, we may have not sold all products at their original RRP.