With a host of award-winning novels to his credit, Victor Kelleher remains one of Australia's most celebrated writers for both adults and young people. Born in London, Kelleher lived in Africa for 20 years before moving to Australia in 1976 and becoming a full time writer. His books have received many awards and commendations, including the Children's Book Council of Australia Book of the Year Award and the Australian Science Fiction Achievement Award. During 1996 Kelleher spent six months at the Keesing Writers' Studio in Paris, having received a grant from the Australia Council Literature board. 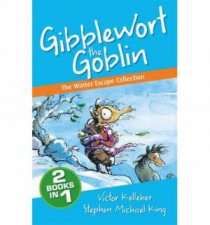 Gibblewort the Goblin: The Winter Escape Collection
by Victor Kelleher
16.99
16.99
_% Off

Taronga
by Victor Kelleher
19.99
19.99
_% Off
RRP refers to the Recommended Retail Price as set out by the original publisher at time of release.
The RRP set by overseas publishers may vary to those set by local publishers due to exchange rates and shipping costs.
Due to our competitive pricing, we may have not sold all products at their original RRP.