David Baldacci was born in 1960 in Richmond, Virginia. He is a bestselling American novelist. Baldacci received a B.A. from Virginia Commonwealth University and a law degree from the University of Virginia. As a student, Baldacci wrote short stories in his spare time, and later practiced law for nine years near Washington, D.C.. While living in Alexandria, Virginia, Baldacci wrote short stories and screenplays without much success. In despair, he turned to novel writing, taking three years to write Absolute Power. It took Baldacci two years to get the book published, but when it finally did hit the shelves in 1996 it was an international best seller.

David Baldacci serves as a national ambassador for the National Multiple Sclerosis Society and participates in numerous charities as well as founding his own foundation for literacy, Wish You Well Foundation. Baldacci was raised in Virginia and still resides there with his wife, Michelle A. Collin-Baldacci (Mikki), and two children. His cousin is the Democratic Governor of Maine John Baldacci, first elected in 2002 and re-elected in 2006.

In 1997, People magazine named him one of the 50 most beautiful people in the world. 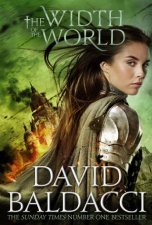 Daylight
by David Baldacci
44.99
44.99
_% Off
RRP refers to the Recommended Retail Price as set out by the original publisher at time of release.
The RRP set by overseas publishers may vary to those set by local publishers due to exchange rates and shipping costs.
Due to our competitive pricing, we may have not sold all products at their original RRP.