It is October 1863, and the American Civil War is in full swing. The Union has a preponderance of men, munitions and manufacturing and the pendulum is swinging its way. But the Confederates have a powerful bargaining point in any peace negotiations: the CSS Manassas, commanded by the audacious Captain Pelle.

The Manassas is a commerce raider, searching the seas far and wide for the Union's merchant fleet. And when it finds the enemy, it sends the ships and their million-dollar cargoes straight to the ocean floor.

As the ships go down, insurance rates go sky high, and Abraham Lincoln is under extreme pressure to stop the Manassas dead. But with the Union Navy stretched to breaking point blockading the South's ports, only one ship can be spared to seek out the Confederate raider.

Enter Captain Samuel Stacy and the USS Oswego. Stacy is tenacious and bull-headed and, perhaps more importantly, has a long-standing feud with Pelle.

There is nothing he wants more than to send the ‘grey raider' to a watery grave. After all, the outcome of the war may depend on it … 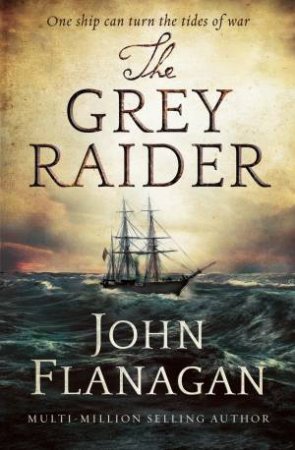 The Grey Raider
John Flanagan
$32.99
RRP refers to the Recommended Retail Price as set out by the original publisher at time of release.
The RRP set by overseas publishers may vary to those set by local publishers due to exchange rates and shipping costs.
Due to our competitive pricing, we may have not sold all products at their original RRP.