Read the book before you see the Arena Spectacular! Hiccup Horrendous Haddock III was an awesome sword-fighter, a dragon-whisperer and the greatest Viking Hero who ever lived. But it wasn t always like that.

Global Creatures and DreamWorks Animation, the masterminds behind the phenomenon Walking with Dinosaurs The Arena Spectacular, have joined forces to create another epic adventure based on the hit movie and book,
How To Train Your Dragon.

This must-see arena spectacle will begin its world tour in Australia in March 2012 and will break all the rules of traditional arena entertainment. In this state-of-the-art production, fire-breathing dragons with wingspans of up to 40 feet will soar overhead, immersing audiences into a magical and mythical world of Vikings and Dragons. 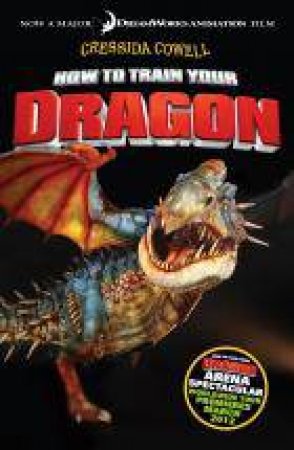 How to Train Your Dragon Arena Spectacular Edition
Cressida Cowell
$16.99
RRP refers to the Recommended Retail Price as set out by the original publisher at time of release.
The RRP set by overseas publishers may vary to those set by local publishers due to exchange rates and shipping costs.
Due to our competitive pricing, we may have not sold all products at their original RRP.