For two years, six months, fourteen days, eleven hours and sixteen minutes… Subject Six-Eight-Four, ‘Jane Doe’, has been locked away and experimented on, without uttering a single word.

Life at Lengard follows a strict, torturous routine that has never changed.

When Jane is assigned a new—and unexpectedly kind—evaluator, her resolve begins to crack, despite her best efforts.

As she uncovers the truth about Lengard’s mysterious ‘program’, Jane discovers that her own secret is at the heart of a sinister plot …. And one wrong move, one wrong word, could change the world.

[b] Preorder availble soon [/b] 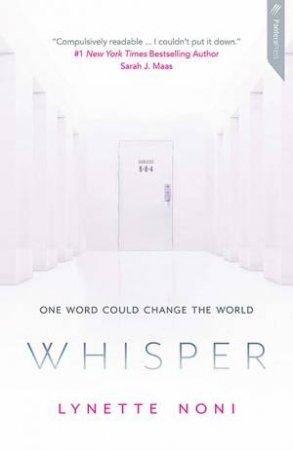 Whisper
Lynette Noni
$19.99
RRP refers to the Recommended Retail Price as set out by the original publisher at time of release.
The RRP set by overseas publishers may vary to those set by local publishers due to exchange rates and shipping costs.
Due to our competitive pricing, we may have not sold all products at their original RRP.