A mysterious creature imperils ancient Ireland in the second book in Juliet Marillier's award-winning Blackthorn & Grim series. Disillusioned healer Blackthorn and her companion Grim have settled quietly in Dalriada to wait out the seven years of Blackthorn's bond to her fey mentor. But trouble has a way of seeking out Blackthorn and Grim. Lady Geiléis, a noblewoman from the northern border, has asked for the prince of Dalriada's help in expelling a howling creature from an old tower on her land - one surrounded by an impenetrable hedge of thorns. Casting a blight over the entire district, and impossible to drive out by ordinary means, the mysterious presence threatens both the safety and the sanity of all who live nearby. As Blackthorn and Grim begin to put the piece the puzzle together, it becomes clear that a powerful adversary is at work. Their quest is about to become a life and death struggle - where even the closest of friends can find themselves on opposite sides. 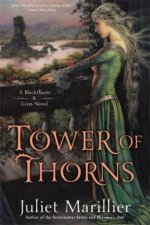 Tower Of Thorns
by Juliet Marillier
19.99
19.99
_% Off
RRP refers to the Recommended Retail Price as set out by the original publisher at time of release.
The RRP set by overseas publishers may vary to those set by local publishers due to exchange rates and shipping costs.
Due to our competitive pricing, we may have not sold all products at their original RRP.