HOUR SIXTY-ONE
Icy winter in South Dakota. A bus skids and crashes in a gathering storm. On the back seat: Jack Reacher, hitching a ride to nowhere. A life without baggage has many advantages. And disadvantages too, like facing the arctic cold without a coat.

HOUR THIRTY-ONE
A small town is threatened by sinister forces. One brave woman is standing up for justice.If she's going to live to testify, she'll need help from a man like Reacher.Because there's a killercoming for her.

HOUR ZERO
Has Reacher finally met his match? He doesn't want to put the world to rights. He just doesn't like people who put it to wrongs. 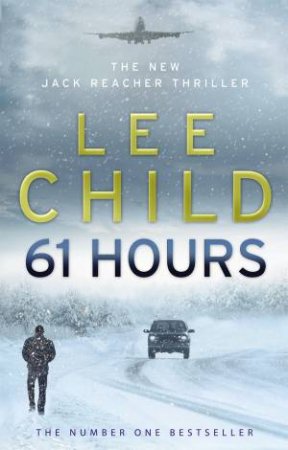 61 Hours
Lee Child
$19.99
RRP refers to the Recommended Retail Price as set out by the original publisher at time of release.
The RRP set by overseas publishers may vary to those set by local publishers due to exchange rates and shipping costs.
Due to our competitive pricing, we may have not sold all products at their original RRP.