After an epic and interrupted journey all the way from the snows of South Dakota, Jack Reacher has finally made it to Virginia. His destination: a sturdy stone building a short bus ride from Washington D.C., the headquarters of his old unit, the 110th MP. It was the closest thing to a home he ever had.

Why? He wants to meet the new commanding officer, Major Susan Turner. He liked her voice on the phone. But the officer sitting behind Reacher's old desk isn't a woman. Why is Susan Turner not there?

What Reacher doesn't expect is what comes next. He himself is in big trouble, accused of a sixteen-year-old homicide. And he certainly doesn't expect to hear these words: ‘You're back in the army, Major. And your ass is mine.'

Will he be sorry he went back? Or – will someone else? 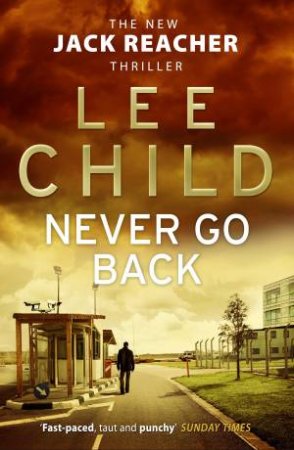 Never Go Back
Lee Child
$19.99
RRP refers to the Recommended Retail Price as set out by the original publisher at time of release.
The RRP set by overseas publishers may vary to those set by local publishers due to exchange rates and shipping costs.
Due to our competitive pricing, we may have not sold all products at their original RRP.