Shannara is an on-going series of high fantasy novels written by Terry Brooks, beginning with The Sword of Shannara, first published in 1977.

Terry has purposefully written most of his series to be read in any order and at any time by new readers. He writes in large generational gaps between series within the world of Shannara, telling the story of all new characters each time out. It means if a new reader wants to start in the middle - they will be able to understand perfectly what is going on and enjoy the novel.

The first season of “The Shannara Chronicles,” a MTV series adapting The Elfstones of Shannara, premiered in 2016. Season 2 will be airing in 2017. 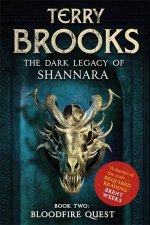 The Sorcerer's Daughter
by Terry Brooks
19.99
19.99
_% Off
RRP refers to the Recommended Retail Price as set out by the original publisher at time of release.
The RRP set by overseas publishers may vary to those set by local publishers due to exchange rates and shipping costs.
Due to our competitive pricing, we may have not sold all products at their original RRP.